Getting to Turbo certainly was a mission but after a very bumpy and beautiful ride, we made it to Turbo...the arsehole of Colombia. We're just glad that we only found out exactly how dangerous it is after we left. Some silly sallies hadn't got money out in Cartagena, so we ventured out of the hostel to find some cash. Police ended up escorting us to the cash machine. On high alert, we didn't know whether this was in our favour or not. So with cash in hand we ran away from the police and back to the safety of John's hostel, where the toilet was actually a feature of the bedroom. One bright side of Turbo was meeting Jorge and his mute friend, who were also making their way to Capurgana the next morning. 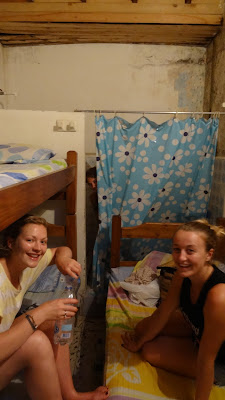 The morning couldn't come soon enough, and at 5:45 we made our way to the "port" to buy our tickets. We then waited around until 9:30, when the boat eventually left. It was another bumpy ride to say the least and Kat was quaking in her boots as to whether Capurgana would be worth the torment she had put her pals through.

Finally we pulled up to paradise, where the coconuts are fresh and the taxis are a horsedrawn cart. We walked through the tiny town to our hostel and couldn't stop marveling at the beautiful carribean town that we had ended up in. It was a contrast with Turbo to say the least. Red Snapper was the order of the day and it was insaaaane. The beach was calling and there were kids willing to play with us! Always a winner. We whiled away the day on the white sand and dipping in the turquoise sea, amazed at how lucky we were to be there.

Wanting to explore all that the area had to offer, we set off on a hike for Panama. We started trekking through thick jungle and slipping all over the shop. Along the way we met a man selling some form of juice that apparently cures cancer. It tasted like bile. After a good two hour trek, we arrived at Sapzurro; a beach town to rival Capurgana. We filled our bellies with a variety of fried produce (none of which were particularly pleasant), then continued our journey to Panama. We literally climbed up one side of the mountain, showed our passports to a man, climbed down the otherside and BOOM we were in Panama!


It was worth the two hour trek for sure. Its beaches had even whiter sand and the beach was practically deserted. It also had the added bonus of a pier, which Kat, Bex and Imy all made full use of throwing our selves of it plenty of times. Before we knew it time was running short we climbed back into Colombia before hiring a boat (we were tired) back to Capurgana.


The evening was filled with card games and apple wine that was two years out of date.

Thanks to Bex speaking to a little girl, we heard about a natural swimming pool called Coquerita. To get there we walked along a coastal path, which was, yet again, stunning. After about an hour we arrived to find that a wicked hippy had built his house right next to the pool and spent his days carving stuff out of wood. The pool filled up by the waves splashing in over the rocks. We spent the whole day at Coquerita and the hippy served up some amazing patacon for lunch.


As the sun started to set, we headed back to Capurgana, to find Jorge and his new little pals fishing off the pier. We went to join in and Imy "stole" a fish by catching it through it's belly.

After a breakfast of patacon, cheese, pastries and coffee, courtesy of Big Mama, we made our way down to the beach for our final day in paradise. Filipe (Usher) hooked us up with some snorkels and we also went fishing on the beach. Kat turned out to be a bit of a pro, catching two within about 10 minutes. One of them turned out to be a deadly tropical fish! Thank God we didn't eat it. After the beach, we managed to catch a bit of the local football tournament, which the whole town had turned out to watch.

To mark the end of our stay in Capurgana, Filipe and his pals had organised a bonfire on the beach. Unfortunately some druggies mascquerading as hippies decided to join us and they kind of put a dampener on the whole thing with their crazy ranting and general lunacy.


Having had the most amazing time imaginable, we were absoluted gutted to have to leave. Everyone we met was so kind and smiley that we wanted to stay in our little carribean treasure forever.